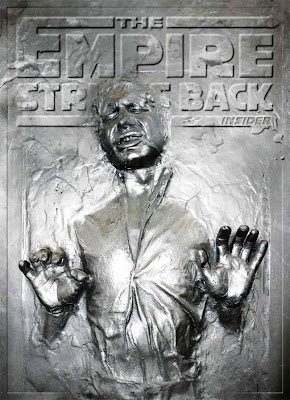 To mark the 30th anniversary of The Empire Strikes Back, Titan is releasing a special tribute issue of Star Wars Insider with an exclusive Han Solo in Carbonite cover, available at this year’s San Diego Comic-Con International and Star Wars Celebration V in Orlando, Florida, August 12 to 15.

The magazine also features interviews with the team behind Star Wars: The Clone Wars looking back on The Empire Strikes Back, 50 amazing facts about Empire, and an Empire merchandise guide. Plus, much more must-have material for all Star Wars fans.

A special Empire cover, which features Han Solo in Carbonite, is available to purchase at the Titan booth at Comic-Con (stand #5537) and Celebration V (booth. #521, part of the Gentle Giant booth).